The Theatre Management Module is a platform to bring together our community of theatre producers and managers to connect their various theatre management experiences at the Wirtz Center for the Performing Arts, in the student theatre community (STUCO), in professional theatre internships in Chicago and elsewhere, with SoC and other Schools’ theatre management-related classes to create a comprehensive, multi-year learning and transitional arc into the professional theatre.

This module will prepare students to begin careers as theatre managers and leaders after graduating from Northwestern University.

Theatre Management and Leadership Seminar: A two-hour seminar will be held once each quarter and will include a leading theatre manager/leader from Chicago (or elsewhere) who will speak about a timely and relevant theatre management topic as well as about their career path and current projects.

The Capstone should include:

Zachary Baer (C10) is the Production Development Coordinator at Disney Theatrical Group in New York. He works closely with the creative and production teams of Disney’s Broadway shows throughout the development process. During his time with Disney Theatrical Group, he has worked on the development and rollout of Aladdin, Newsies, and Shakespeare in Love, and he is currently working on the Broadway-bound production of Frozen. Prior to joining Disney Theatrical Group, Zachary worked at Roundabout Theatre Company and was also a Co-Producer of Peter and the Starcatcher on Broadway. Zachary volunteers on the TEDxBroadway Planning Committee and the Northwestern University Alumni Admissions Council. As a student, he produced The Dolphin Show and the New York Showcase and served as a board member for Arts Alliance and The Waa-Mu Show.

Jon Faris joined Writers Theatre in 2005 and managed the design and construction of a new state-of-the-art theatre center, designed by internationally renowned architect and MacArthur Fellow recipient Jeanne Gang of Studio Gang Architects. Previously, Jon was the managing director of Uma Productions, an award-winning theater company in Chicago, and worked at Steppenwolf Theatre Company as the Coordinator of The School at Steppenwolf and as the assistant to Artistic Director Martha Lavey and Executive Director David Hawkanson. A graduate of Northwestern University, he has guest lectured on arts management at Northwestern University and serves on the alumni advisory board for NU’s Theatre Management Module program.

Kaitlin Fine graduated from the School of Communication in 2009 and started working in New York shortly thereafter. She has worked in the industry in various capacities, from executive assistant to creative development to interim director of AMTP back at NU. After opening Hamilton on Broadway and spending a year with the New York company, she followed the show back to the Midwest and is now the Associate Company Manager of Hamilton in Chicago. On campus, she was a Waa-Mu Co-Chair and on the Arts Alliance board, and she can confidently say that Broadway is exactly like student theater, just with more 0s.

Laura Matalon, President Allied Live, has been a leader and innovator in marketing live entertainment properties for 30 years.  She has led the marketing campaigns for more than 50 Broadway and touring Broadway properties including RENT, The Book of Mormon, Hair, Avenue Q, Billy Elliot, Kinky Boots and the upcoming tour of Hamilton.   Allied Live is the premiere entertainment marketing agency for the commercial theatrical industry. Laura is a long-time member of The Broadway League where she is an active participant having served as co-chair and/or a member of the planning committee for their annual Spring Road Conference for more than 20 years.   She also sits on the Intra-Industry and Road Marketing Committees.  She was one of the first recipients of The Broadway League’s Outstanding Achievement in Road Marketing Awards.   She has served as a speaker at meetings and conferences as well as guest lectured at Northwestern University, Columbia College Chicago and at the Commercial Theater Institute.  She sits on the board of Chicago’s Tony Award winning Lookingglass Theater, and as an Advisory Board member for Chicago’s Windy City Playhouse and Broadwaycon, Broadway’s own fan convention.  In her spare time she volunteers at Gilda’s Club and Inspiration Café and has recently started tap lessons. 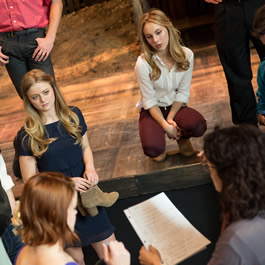 This module is open to all NU undergraduates.